eb Shlomo awoke with a start. He was half awake and still in bed. He remembered that it was Friday morning, erev Shabbos. Today would be a glorious day. Today would be the day that Rabbi Shlomo would present the Torah scroll to the people of the town. And the next day, during the morning services for Shabbat, the people from the town would hear the words of Torah spoken from their new Torah Scroll. The week’s portion was

Ki Tavo’. It was a section of the Torah that began with these words:

It was near the end of the scroll and Rabbi Shlomo had only inscribed these words less than four weeks earlier. When he reminded himself of this week’s Torah portion he decided that he would be sure to bring a basket of apples –first fruits– to the shul that morning.

Just as this thought entered his head, he heard an insistent knock on the door of the house and he realized that it was the second time that someone had knocked waiting for an answer. He jumped out of bed and ran to the door wondering if something was wrong. Was there a fire?

Why would someone knock so loudly and impatiently? “Wait a minute, hold your horses, I’m coming” he yelled. When he opened the door there was his uncle, Rabbi Avram along with six other men from the town. “What’s wrong? What happened? Why are you all here so early in the morning? Is there a house on fire?” His uncle looked at him with a very serious scowl and said, “What’s wrong?”, he said, “I’ll tell you what’s wrong.” But as he started to speak, he couldn’t help but begin to smile, “Here we have been waiting all year for our Torah and what happens? We are waiting and waiting at the shul, since 6:00 AM ready to start morning services, but there’s no Shlomo, no Shmuel, no Pinchas and no Torah! So we decided that we couldn’t wait any longer and we came to get you. Do you know what time it is?”

By this time Shmuel and Pinchas were at the door standing in their nightshirts, coming to see what the racket was. The men hugged each other and began to sing and then dance, “Siman Tov a Mazel Tov, Siman Tov a Mazel Tov…” In a few minute the men were dressed, they carefully took the scroll from the cabinet, and the ten men walked, singing joyously, carrying their most prized possession down the street to the middle of the town’s Jewish section, to the shul. All the people from the town, the women and the children were standing outside their houses, lining the streets, just so that they could get a glimpse of the magnificent new Torah Scroll, but all they could see was a big box. Soon everyone was following them to the shul.

The shul in Amschelberg was two stories high and was built in 1740. Some shuls had a mechitzah, a curtain that separated the women’s section from the men’s. But the women much preferred the shuls that had the women’s section on the second floor in the gallery. From that vantage point, the women could look down over the railing and see the bimah, the Ark, and the Torah Scroll. This was far better than sitting behind a curtain, where they couldn’t see anything, but could only hear the voices of the men davening and reading and chanting. The men lovingly and carefully took the Torah out of the special box that had been made to carry it over its long journey to Amschelberg. The Torah was held high for everyone to see. It was clearly, a very fine Torah. It had long sheets of parchment and beautifully carved wooden rollers. All the people from the town breathed a joyous sigh.

They laid the Scroll onto the bimah and rolled it to the last section of parchment. Rabbi Avram took the quill and handed it to his brother, Rabbi Shlomo. He dipped the quill in the inkwell and very carefully inscribed the next two words:

“l’einei” kol. Then he handed the quill to Avram, who dipped it in the ink again and then very slowly and carefully, without dripping any ink or shaking his hand, he wrote

“yisroel”. The entire congregation burst into song. Their beloved Torah had arrived and was now completed. Before the Torah was put in the ark, Rabbi Shlomo handed his brother, Rabbi Avram the beautiful silk and velvet mantle that their sister Tanta Manya in Prague had specially made. The mantle was made of dark blue velvet, lined with white silk and golden tassels. With gold embroidery, finely stitched, it was inscribed in Hebrew with the words: “It is a Tree of Life”.

As soon as the Torah was put away, they had some of the fresh apples that Shmuel remembered to bring and whatever was left of Tanta Manya’s mandelbrot. Then everyone realized that it was after ten in the morning and they needed to get busy getting ready for Shabbos. Last minute shopping and cleaning, challah baking, baths, ironing the table cloths, setting the tables, preparing the cholent, making the chicken soup with noodles, making the gefilte fish. So many things that needed to be done to prepare for their joyful weekly festival, a time when nobody had to work and everyone could just be together.

The three men, Shlomo, Pinchas and Shmuel received many invitations for the Friday night Shabbos meal and they each went to different places to friends or relatives. The next day, on Shabbas morning, everyone from the town was inshul early. Even the stragglers, the ones who didn’t usually come until it was time for the Amidah prayer were there early for the introductory prayers. They all waited with great expectation for the Torah reading. The men’s voices were strong as they sang the ancient melodies. 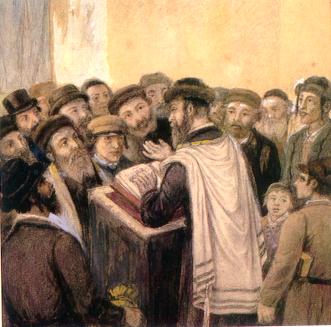 The women, looking down from the upstairs gallery, sang along, but very quietly, so as not to cause the men to hear their voices and distract them from their davening. When it came time for the Torah reading, Reb Shlomo was layning the Torah and for a moment he looked up from the Torah and for a brief moment he seemed to look directly up to the women’s section. He read the following verse from Deuteronomy, chapter 27, verse 9:

“Moses and the levitical priests spoke to all of Israel, saying: Shema! Pay attention and listen, Israel. Today you have become a nation to God your Lord.”

Some years later, as the townsfolk repeated this story to their children and grandchildren of the day that Amschelberg got its first Torah it was told that everyone in the small shul could hear the women’s voices from the gallery, quite audibly reciting the words of the Shema along with him.